One of the great pleasures of this trip has been Father Luke’s commentary about the Roman skyline from the beautiful terrace at the Convitto. A few evenings ago, Father Luke pointed out the Basilica dei Santi Cosma e Damiano and reminded me of its connection to Thomas Merton. The church features in The Seven Story Mountain. (There are, of course, 2 copies of the book on the Convitto’s bookshelf, both in Italian.)

I had been in Rome before, on an Easter vacation from school, for about a week. I had seen the Forum and the Colosseum and the Vatican museum and St. Peter’s. But I had not really seen Rome. This time, I started out again, with the misconception common to Anglo-Saxons, that the real Rome is the Rome of the ugly ruins, the hills and the slums of the city.

Well, “the ugly ruins” are underneath this church, which faces out onto the Roman Forum. The relationship between the church and the Forum isn’t totally clear – I didn’t realize it was the same church we’d seen from below on our tour of the Forum. 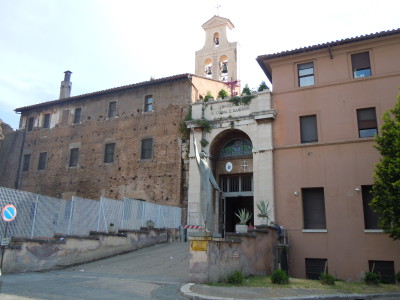 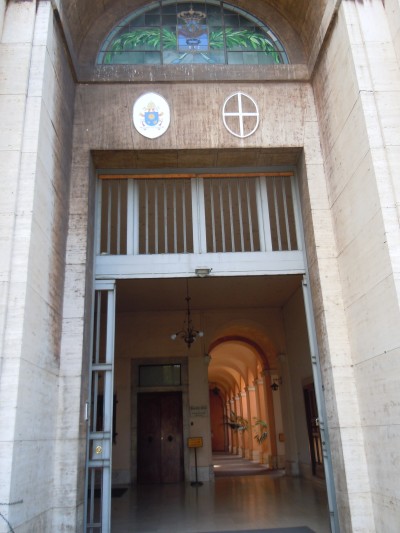 the seal on the left indicates that this is a papal basilica – I still haven’t totally figured out what this means.

It’s hard to understand how the church was built, whether the Forum underneath was excavated, etc. 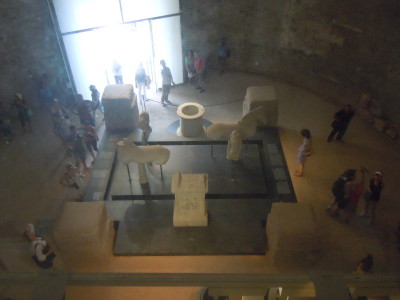 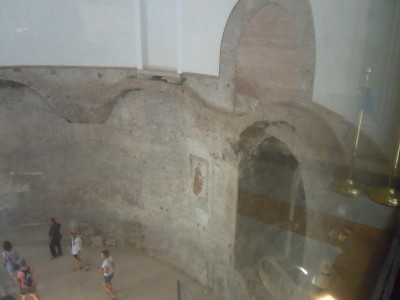 Father Luke says that Thomas Merton had his conversion at this basilica – perhaps “conversion” is too strong a word but certainly he claims that his first inklings of a spiritual consciousness were spurred by the experience of visiting the mural here. 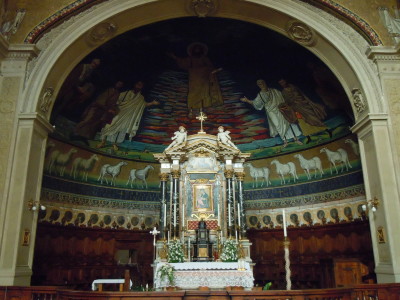 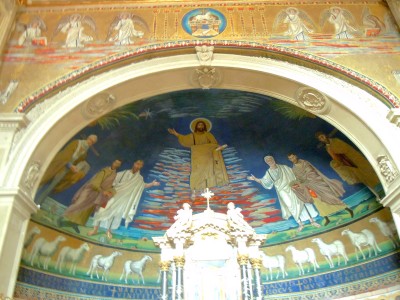 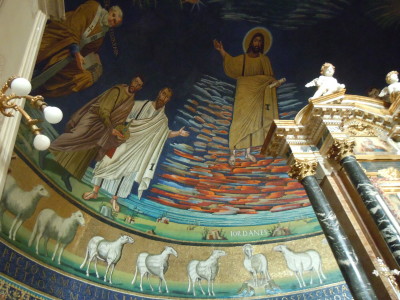 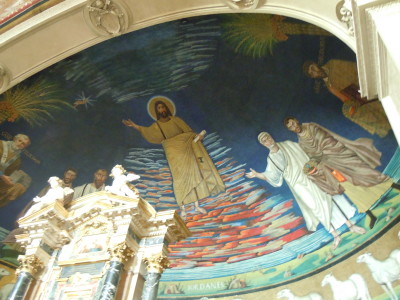 Something real groovy that I wasn’t expecting: this mural of female saints: 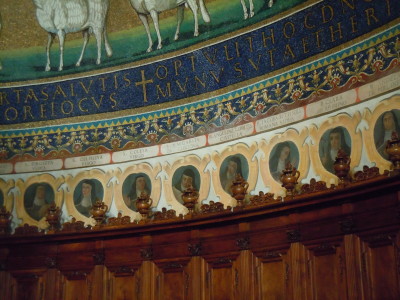 This was another example of a church with an absurdly rich history that was just not at all served by the information available publicly. I can’t get over how chintzy these little phone information booths are: 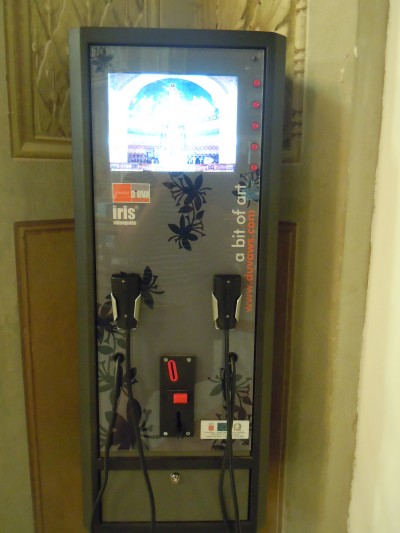 this is the only video phone or whatever I saw that didn’t look like it was rom the 90s. there’s an LCD screen! but is this really the best way to monetize a cultural resource? 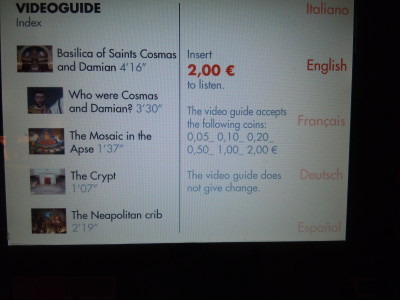 extract every last euro from tourists by refusing to put any captions up in your cultural site. also: totally possible to walk into the sanctuary without knowing what the “Neapolitan crib” is! and you have to pay another 2 euro to see THAT, and they only sell the guidebooks there, and there’s no signage telling you to peep the nativity set first, weakkkk

Obviously the signage left something to be desired…this was a light switch that was pretty pointless because it just created insane amounts of glare on the painting it was supposed to be illuminating. 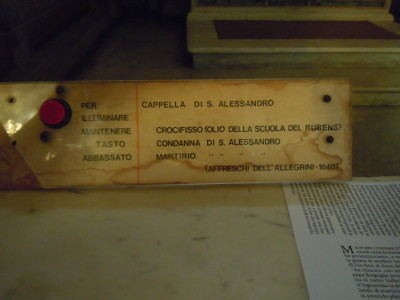 Check this out though, I think it’s a machine charging you to light up a different painting. 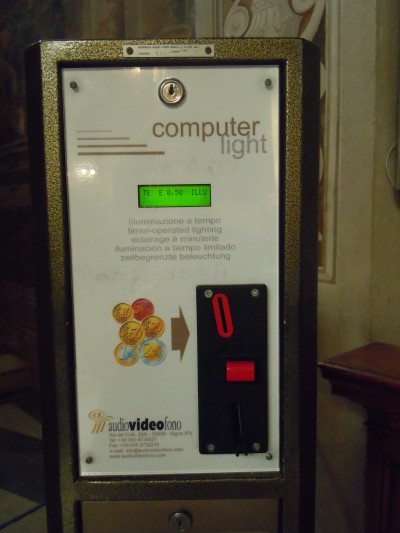 This church also had that feature of Roman churches which drives me batty: paintings exposed to direct sunlight, generally above heating vents! 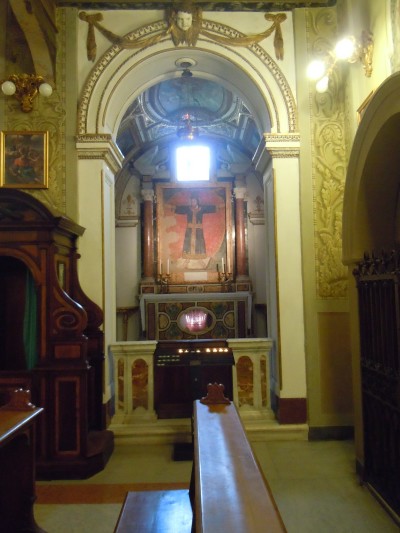 Anyway. This church has an extra-special bonus, massive nativity scene. Here’s all the information that was freely available: 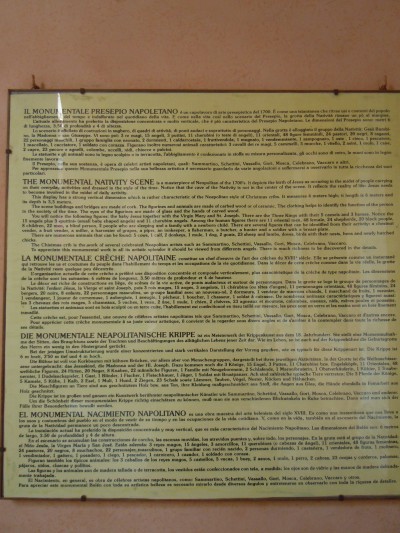 Here’s the Phantom Tollbooth where I’m sure a priest or a nun sits to collect your money just like at St. Cecilia. The glass case includes actual guidebooks to the church – so obnoxious not to have these at the entrance to the actual building. 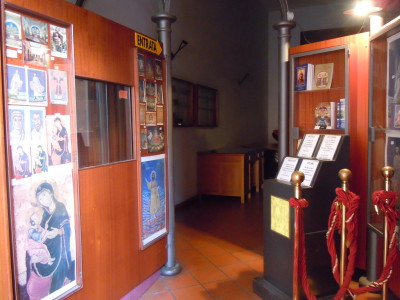 The nativity set was really impressive. I had no idea what to expect so I was surprised. I’ve seen a lot of nativity sets at the Mormon Temple here in DC, which does a display of creches from around the world every year, but I’ve never seen anything like this. I’d imagine that most of these are in Italy, plus I can’t think how they’d display it here given the wiring requirements for that heavenly host. 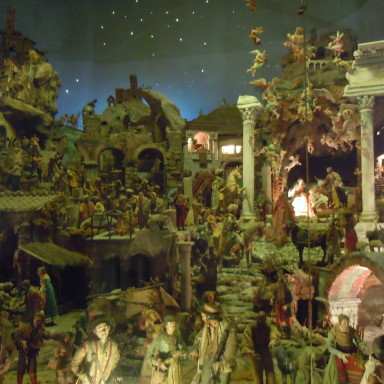 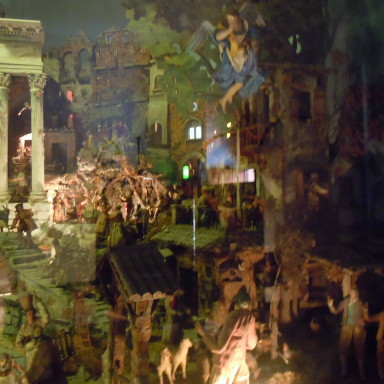 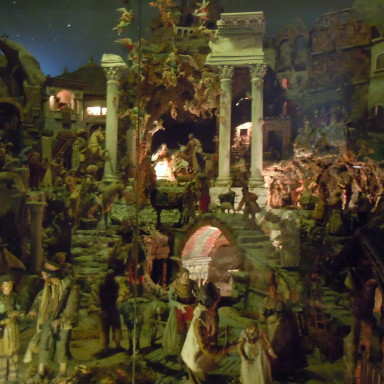 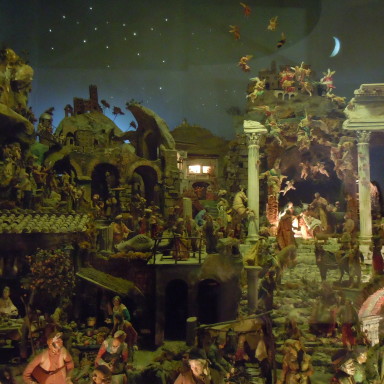 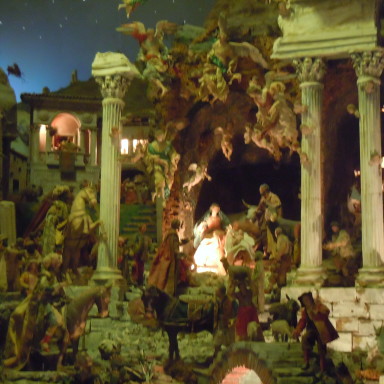 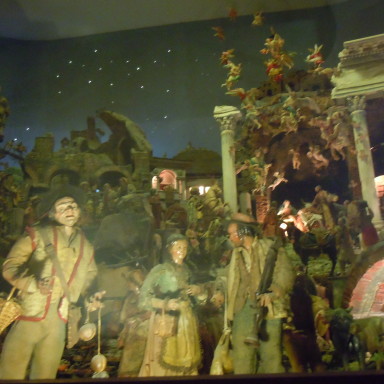 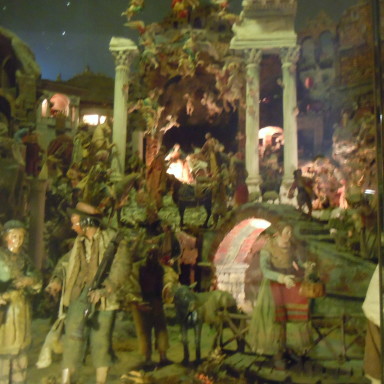 Father Albert recommended this book and the Balbi Crypt museum, which he says shows the history of a few city blocks over a 2000 year period – this seems to be a different sort of approach for the museums here, so I’m very interested to visit. I didn’t spend much time with the book but have to recommend it on the basis of the following quote about the Capuchin’s Cemetery:

In the basement of the Capuchin church in Via Veneto, there is an unusually artistic cemetery where the bones of 4,000 monks who died between 1600 and 1800 decorate the vaults and walls of four chapels in rather questionable taste. A touch of the macabre, but it is worth a visit during a holiday in Rome.

I don’t think I felt my inner Thomas Merton here, much. There was a church where I felt something, but I can’t remember which it was. They do seem to blur together, except for the mosaic, the nativity set, and the Forum overlook at this one, and St. John Lateran is pretty unforgettable because of the size. I can’t get over how amazing the ceilings are in Rome, though. I wanted to lie down to get more of it in the frame: 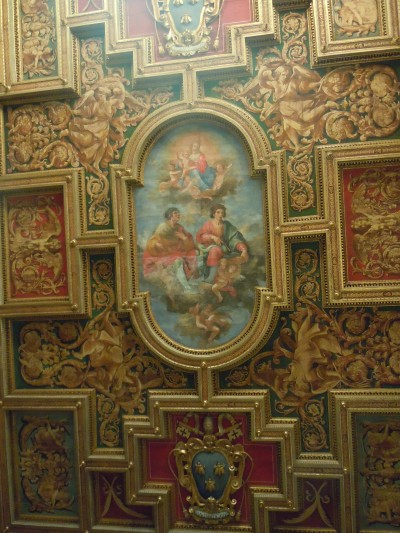