On this trip, I went to 3 art galleries: the Pitti Palace and the Uffizi Gallery in Florence, and the Borghese Gallery in Rome.

Of the 3, the Borghese was hands-down the most memorable experience. The collection was much smaller, and for some reason seemed to have more Carravaggio paintings, which I was all about (the Medusa at the Uffizi was cool, though). They also had a lovely Botticelli: 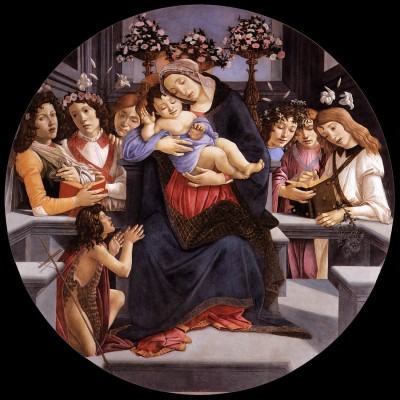 Unlike the Uffizi, you could actually see this Botticelli!

My friend Raymond recommended this museum, I think, mainly for the fabulous Bernini statues. The Rape of Proserpina was obviously my favorite: 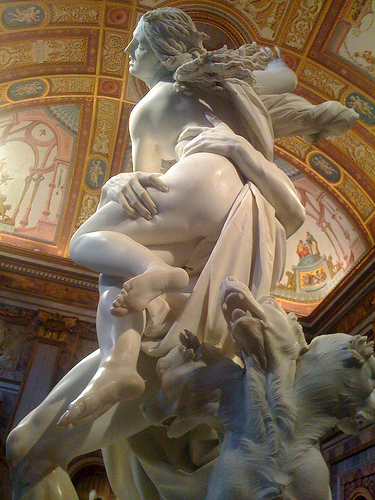 and your little dog, too.

at first I was transfixed by her feet, but Keegan pointed out that Pluto’s fingers are digging into her flesh. Keegan has better photos. I can’t find any closeups online. it was truly astonishing.

the best part of this museum was the ticketing. it was a total pain to get, for some reason they wanted your SSN to purchase which, uh, NO. they sell tickets for a 2-hour window to see the museum. I wish I’d know that they flush the museum at the end of your reservation time, because we would have showed up at our entry time instead of only giving ourselves about an hour. it was easy to avoid tour groups, so none of the obnoxious talking that happens at other museums.

this was honestly the best museum experience I’ve had in my life. i think they let just the right amount of people in, we had a few rooms to ourselves for a few minutes. museums in the US should do this and charge a premium to go (maybe they already do).

ok, back to Florence. 2 museums with Medici origins of some kind. I was not into the Uffizi: way too crowded, and way too many of the same thing, repeated (I felt the same way about the Capitoline). y’all know I love nativity scenes but COME ON.

I much preferred the Pitti Palace: the grounds were super chill to wander, the view of Florence from the top of the hill was choice, and, the interpretation of Rites of Spring in the costume exhibit was far more enjoyable than trying to catch a glimpse of the actual painting at the Uffizi. the Uffizi building was pretty cool, I guess, but man, I don’t think I would have felt like I was really missing anything by not going: the signage, as in most of these museums (the Borghese was the rare exception, and the Pitti Palace actually did have some information; a little less thorough than the Borghese’s, though, which had comments on every piece in every room) was so lacking that half the time I had no idea what I was looking at, it seemed like the Carravaggio room was either closed or they had only 3, all the busts looked the same and CERTAINLY the nativity scenes looked the same.

wow, I am so uncultured!