Hello readers, I was going to update with my big news but circumstances are still developing. So in the meantime here is another post about a cat. This one needs a loving home (even though I love her very much).

Sweet Chiki has passed through a few homes on my street, first due to a mismatch with another cat in her household, and next due to a lifestyle conflict with her owner who isn’t home enough to cuddle quite as much as Chiki would prefer. We had hoped that Chiki would mesh well with my favorite boy, Carlos Danger, who loves to play with other cats. But Chiki has continued to be standoffish and worse, rather than playing with Carlos (who is himself insatiable in his need for constant play), she has completely muscled in on his playtime with us. This is a sad situation for Carlos, who spends his days disappointed that Chiki doesn’t want to be friends with him and that his playtime with us has been interrupted.

She is the perfect cat for someone who spends a lot of time at home. Is there an older person in your life, or someone newly working from home, who would enjoy a wonderful companion? She is the least obtrusive lap cat that I’ve ever met. She enjoys resting her head on my arm when I use my mouse and/or keyboard, instead of lying on the keyboard or trying to interfere with the mouse. She is sweet and inquisitive and loves to lie on your chest and cuddle beside you in bed. She is very curious and playful, is not interested in destroying furniture, allows her nails to be trimmed with minimal fuss, and enjoys playing with laser pointers so she is very easy to exercise. When you lie down, Chiki will lie on your chest until you kick her off. Then she will sleep beside you.

Chiki has three annoying habits. Her first annoying habit is that she likes to climb into drawers when you are trying to put things away. If the drawer is deep, it can be tricky to remove her. Walking away usually does the trick. Her second annoying habbit is that she stands up and puts her front feet on you, like a dog. When you are standing up this is not so bad, but she will jump onto counters to do this. For example, when I try to wash dishes, she cannot help herself:

She also does this when I brush my teeth. Her third annoying habit is that she will follow you into the bathroom and sit on your lap when you sit on the toilet. She will not be denied. She is too quick to close the door on, and her complaints about being removed are so dramatic that it’s hardly worth the effort.

Don’t tell the other cats, but Chiki has quickly become my favorite. She is highly personable and rarely annoying. I will miss her terribly, but four cats is too many and she is not enhancing the quality of life of any of the others. She could easily live with other cats, but does not seem to have much use for feline companionship and would be perfectly happy with one person who is home a lot. She is fully grown, but obviously young. She will need shots and a dental cleaning and would do well in an indoor/outdoor situation.

Here are some photos of this little charmer demonstrating her co-working/lap sitting skills. Chiki is with us in Chicago right now, but I can deliver her anywhere north of Richmond on the eastern seaboard. 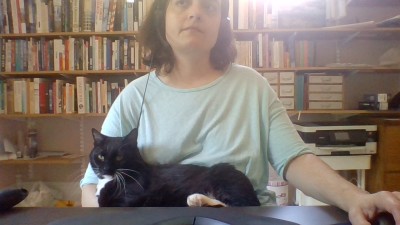 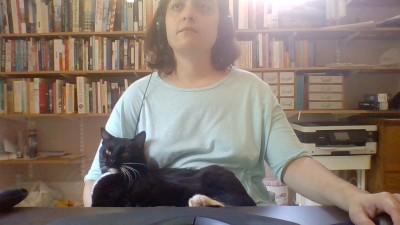 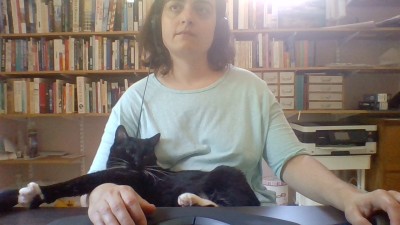 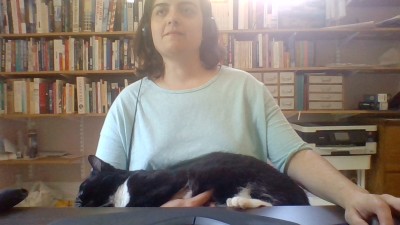 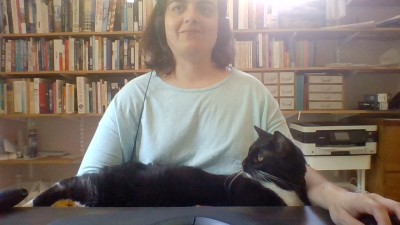 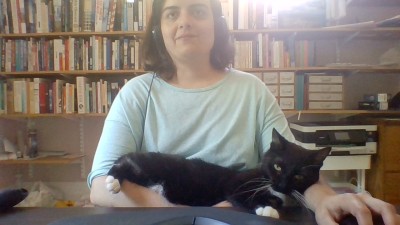 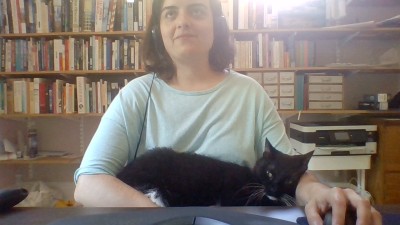 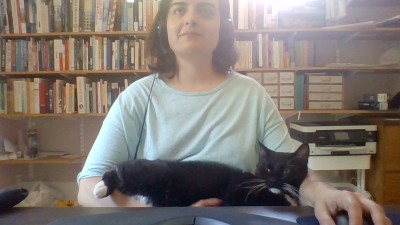 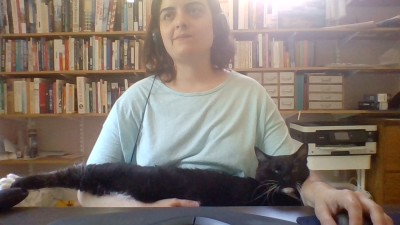 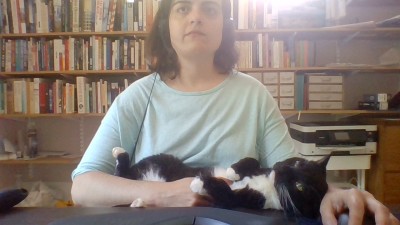